Fluid mechanics is widely used both in everyday activities and in the design of modern engineering systems, from vacuum cleaners to supersonic aircraft.

To begin with, fluid mechanics plays a vital role in the human body. The heart is constantly pumping blood to all parts of the human body through the arteries and veins, and the lungs are the sites of airflow in alternating directions. All artificial hearts, breathing machines, and dialysis systems are designed using fluid dynamics. 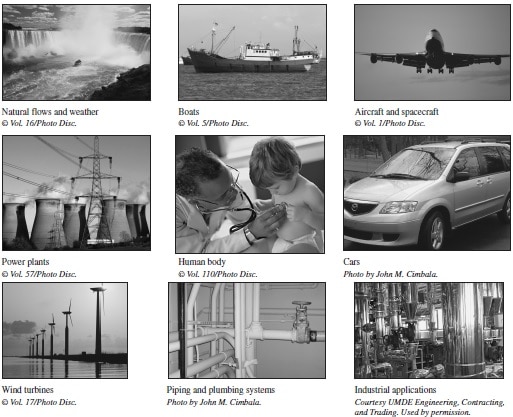 We can also see numerous applications of fluid mechanics in an automobile. All components associated with the transportation of the fuel from the fuel tank to the cylinders, the fuel line, fuel pump, fuel injectors, or carburetors, as well as the mixing of the fuel and the air in the cylinders and the purging of combustion gases in exhaust pipes, are analyzed using fluid mechanics. Fluid mechanics is also used in the design of the heating and air-conditioning system, the hydraulic brakes, the power steering, automatic transmission and lubrication systems, the cooling system of the engine block, including the radiator and the water pump, and even the tires. Recent model cars’ sleek, streamlined shape results from efforts to minimize drag by using extensive flow analysis over surfaces.

On a broader scale, fluid mechanics plays a significant part in designing and analyzing aircraft, boats, submarines, rockets, jet engines, wind turbines, biomedical devices, the cooling of electronic components, and the transportation
of water, crude oil, and natural gas. It is also considered in the design of buildings, bridges, and even billboards to make sure that the structures can withstand wind loading. Numerous natural phenomena such as the rain cycle, weather patterns, the rise of groundwater to the top of trees, winds, ocean waves, and currents in large water bodies are also governed by fluid mechanics principles.


Components of Roads and their Functions