Cams, Followers and their Types

A cam is a rotating or sliding piece in a mechanical linkage that drives a mating component known as a follower. From a functional viewpoint, a cam-and-follower arrangement is very similar to the linkages. The cam accepts an input motion (rotary motion or linear motion) and imparts a resultant motion (linear motion or rotary motion) to a follower. 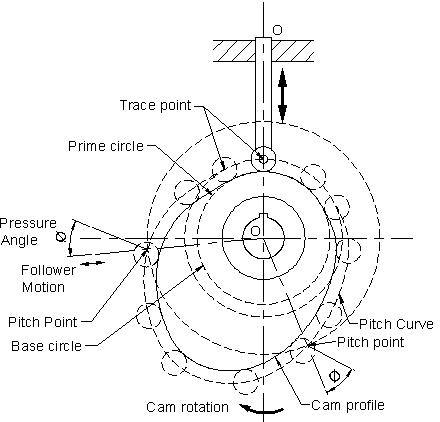 Base circle: Base circle is the smallest circle, drawn tangential to the cam profile.

Pitch curve: Pitch curve is the path generated by the trace point as the follower is rotated about a stationery cam.

Prime circle: Prime circle is the smallest circle that can be drawn so as to be tangential to the pitch curve, with its centre at the cam centre.

Pressure angle: The pressure angle is the angle between the direction of the follower movement and the normal to the pitch curve.

Pitch circle: A circle drawn from the cam center and passes through the pitch point is called Pitch circle.

Stroke: The greatest distance or angle through which the follower moves or rotates.

Cams can be classified into the following three types based on their shapes. They are: 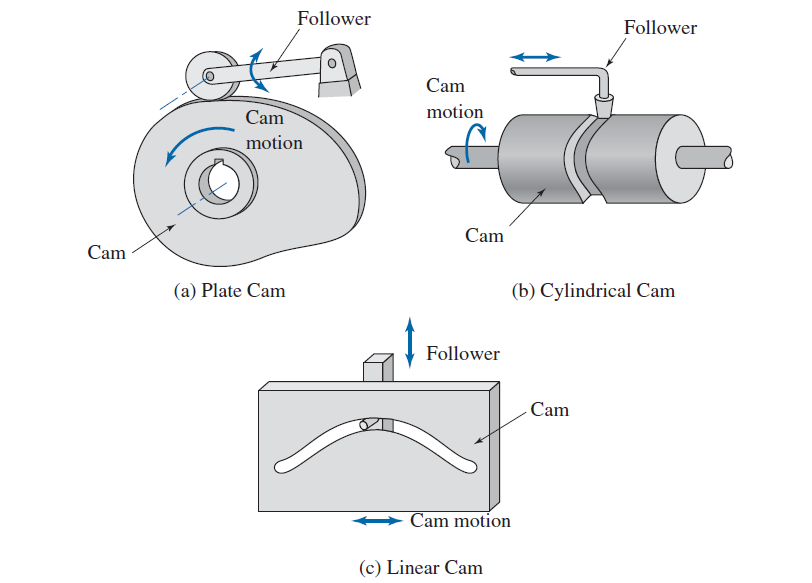 Followers are classified based on their motion, position and shape. The details of followers classifications are shown in the figure 4 and discussed below 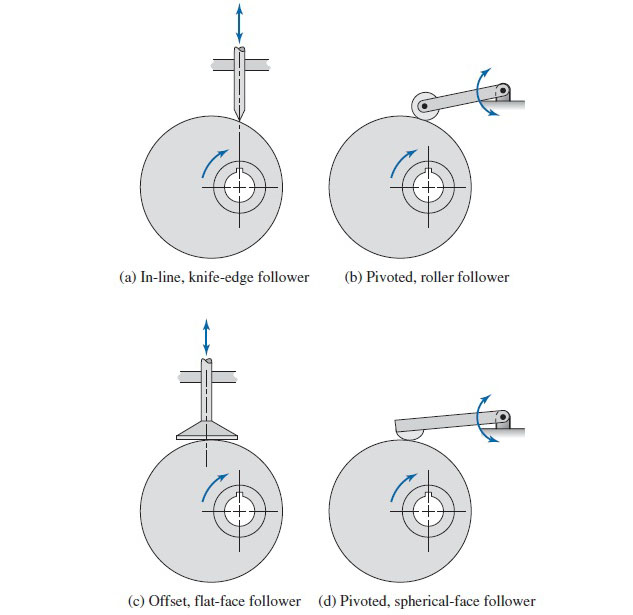 1. Based on Follower Motion
Based on the follower motion, followers can be classified into the following two categories:

(i). Translating followers are constrained to motion in a straight line and are shown in figure 4 (a) and 4 (c).

(ii). Swinging arm or pivoted followers are constrained to rotational motion and are shown in figure 4 (b) and 4 (d).

2. Based on Follower Position
Based on the follower position, relative to the center of rotation of the cam, is typically influenced by any spacing requirements of the machine. The position of translating followers can be classified into the following two categories:

(i). An in-line follower exhibits straight-line motion, such that the line of translation extends through the center of rotation of the cam and is shown in figure 4 (a).

(ii). An offset follower exhibits straight-line motion, such that the line of the motion is offset from the center of rotation of the cam and is shown in figure 4 (c).

In the case of pivoted followers, there is no need to distinguish between in-line and offset followers because they exhibit identical kinematics.

3. Based on Follower Shape
Finally, the follower shape can be classified into the following four categories:

(i). A knife-edge follower consists of a follower that is formed to a point and drags on the edge of the cam. The follower shown in figure 4 (a) is a knife-edge follower. It is the simplest form, but the sharp edge produces high contact stresses and wears rapidly. Consequently, this type of follower is rarely used.

(iii).  A flat-faced follower consists of a follower that is formed with a large, flat surface available to contact the cam. The follower shown in figure 4 (c) is a flat-faced follower. This type of follower can be used with a steep cam motion and does not jam. Consequently, this type of follower is used when quick motions are required. However, any follower deflection or misalignment causes high surface stresses. In addition, the frictional forces are greater than those of the roller follower because of the intense sliding contact between the cam and follower.