Casting process often contains various imperfections which contribute to normal quality variations. These defects not only give a bad appearance to the castings but also decrease their strength and practical utility. Therefore, it is essential to study the defects and inculcate precautions to avoid these defects in the final products. 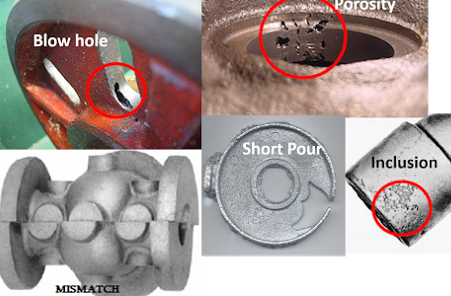 The defects in the casting can be grouped into seven categories as mentioned below.

1. Metallic Projections: These are small metallic projections on casting surfaces. Loose clamping or misalignment of molding flasks or pattern results in lifts or shifts. Fins and flashes are thin projections at the parting line that appear due to improper matching of surfaces of the molding flasks. Swell is a localized deformation of the vertical mold faces due to the pressure of molten metal.

2. Cavities: Blows are trappings of air and appear internal voids because of poor ventilation, while gas holes occur due to poor ventilation of dissolved gases in the melt, particularly hydrogen. Pin holes are tiny blow holes inside and below the casting surface. Porosity is due to decrease in gas solubility in the metal during solidification. Shrinkage cavity occurs because of improper riser design and placement.

3. Discontinuities: Discontinuities in casting are caused by hindrance in the contraction of the casting. Hot tears are the cracks developed in the metal due to residual stresses in the solidified metal caused by solid shrinkage of the metal. Hot spots are the portions of casting, which solidify in the end are often the cause of hot tears.

4. Defective Surface:  Shallow blows on the surfaces are called scars, while scars covered with a thin layer of metal are called blisters. The dots found on the surface after removing dirt are called dirt. Rattail is a minor buckle that occurs due to compression of mold face on the bottom. Penetration is due to soft and porous mold face. Crushers are the defects on the surface occurring due to damages during molding or placing of the cores. Rapid cooling of the certain points results in hard spots on the casting surface. Wash is the extra metal due to the erosion of molds caused by metal flow on down surfaces.

5. Incomplete Casting: Misrun is the space in the mold cavity that occurs due to prior solidification of the changing face of the melt. The metal fails to reach all sections of casting. Cold shuts are caused by the mating of two cold streams of metals moving in opposite directions. Incomplete filling of the mold cavity is known as pour short, while drainage of molten metal from mold cavity is called run out.

6. Incorrect Dimension and Shape: Buckle in the casting is due to the curved mold surface caused by thermal expansion of mold. The drop is the extra metal caused by erosion of mold surface due to poor green strength.

7. Inclusions: On solidification of the molten metal, the suspended impurities appear as inclusion, which weakens the casting. Lighter impurities of oxides found in castings are called dross.

The probable causes and suggested solutions for this various defects are covered in our previous article.