The moment produced by two equal, opposite and noncollinear forces is called couple. Couples have certain unique properties and important applications in mechanics.

Considering the action of two equal and opposite forces ‘F’ and ‘-F’ a distance ‘d‘ apart, as shown in fig. 1 (a). These two forces cannot be combined into a single force because their sum in every direction is zero. Their only effect is to produce a tendency of rotation. The combined moment of two forces about an axis normal to their plane and passing through any point such as ‘O’ in their plane is the couple ‘M’. This couple has a magnitude

Its direction is counterclockwise when viewed from above for the case illustrated. Note especially that the magnitude of the couple is independent of the distance a which locates the forces with respect to the motion center ‘O’. It follows that the moment of a couple has the same value for all the moment centers.

We may also express the moment of  a couple by using vector algebra. The combined moment about points ‘O’ of the forces forming the couple of Fig. 1 (b) is

where rA and rB are position vectors which run from point ‘O’ to arbitrary points A and B on the lines of action of ‘F’ and ‘-F’, respectively. Because rA – rB = r, we can express M as

Here again, the moment expression contains no reference to the moment center ‘O’ and therefore, is the same for all the moment centers. Thus, we may represent M by a free vector, as shown in Fig. 1 (c), where the direction of M is normal to the plane of the couple and the sense of M is established by the right-hand rule. 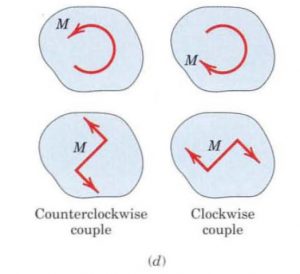 Changing the values of ‘F’ and ‘d‘ does not change a given couple as long as the product ‘F.d’ remains the same. Likewise, a couple is not affected if the forces act in a direction but parallel plane. Fig. 2, shows four different configurations of the same couple M. In each of the four cases, the couples are equivalent and are described by the same free vector which represents the identical tendencies to rotate the body.

The effect of force acting on a body is the tendency to push or pull the body in the direction of the force and to rotate the body about any fixed axis which doesn’t intersect the line of force. We can represent this dual effect more easily by replacing the given force by an equal parallel force and a couple to compensate for the change in the moment of the force.

The replacement of a force by a force and a couple is illustrated in Fig. 3, where the given force F acting at a point ‘A’ is replaced by an equal force ‘F’ at some point ‘B’ and counter clockwise couple M = F.d. The transfer is seen in the middle figure, where the equal and opposite forces ‘F’ and ‘-F’ are added at point ‘B’ without introducing any net external effects on the body. We now see that the original force at point ‘A’ and the equal and opposite force one at point ‘B’ constitute the couple M = F.d, which is counter clockwise for the sample chosen, as shown in the right-hand part of the figure 3. Thus, we have replaced the original force at A by the same force acting at a different point B and a couple, without altering the external effects of the original force on the body. The combination of the force and couple in the right-hand part of Fig. 3 is referred to as a force-couple system.

By reversing this process, we can combine a given couple and a force which lies in the plane of the couple (normal to the couple vector) to produce a single, equivalent force. Replacement of  a force by an equivalent force-couple system and the reverse procedure, have many applications in mechanics and should be mastered.