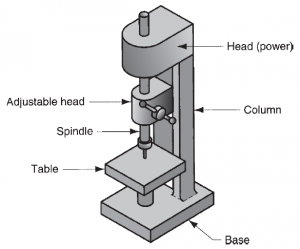 The standard machine tool used for drilling is the drill press. There are various types of the drill press, the most basic of which is the upright drill, Figure 1. The upright drill stands on the floor and consists of a table for holding the workpart, a drilling head with a powered spindle for the drill bit, and a base and column for support. A similar drill press, but smaller, is the bench drill, which is mounted on a table or bench rather than the floor.

The radial drill machine shown in figure 2, is a large drill press designed to make holes in large parts. Radial drill machine has a radial arm along which the drilling head can be moved and clamped. The head, therefore, can be positioned along the arm at locations that are a significant distance from the column to accommodate large work. The radial arm can also be swiveled about the column to drill parts on either side of the worktable.

The gang drill is a drill press consisting basically of two to six upright drills connected together in an in-line arrangement. Each spindle is powered and operated independently, and they share a common worktable so that a series of drilling and related operations can be accomplished in sequence (e.g., centering, drilling, reaming, tapping operations) simply by sliding the workpart along the worktable from one spindle to the next. A related machine is a multiple-spindle drill, in which several drill spindles are connected together to drill multiple holes simultaneously into the workpart. 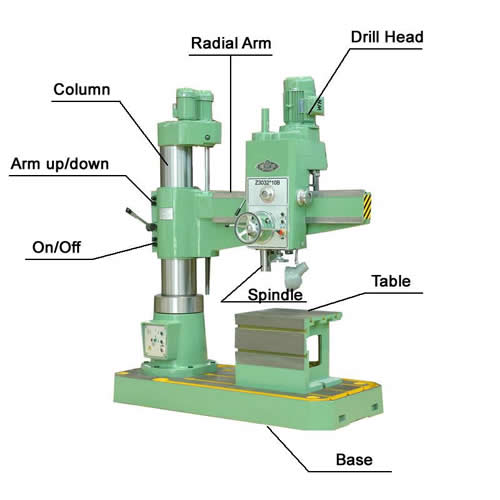 In addition, CNC drill presses are available to control the positioning of the holes in the workparts. CNC drill presses are often equipped with turrets to hold multiple tools that can be indexed under control of the CNC (Computer Numeric Control) program. The term CNC turret drill is used for these machine tools.

Workholding on a drill press is accomplished by clamping the part in a vise, fixture, or jig. A vise is a general-purpose work holding device possessing two jaws that grasp the work in the position. A fixture is a work holding device that is usually custom-designed for the particular workpart. The fixture can be designed to achieve higher accuracy in positioning the part relative to the machining operation, faster production rates, and greater operator convenience in use. A jig is a work holding device that is also specially designed for the workpart. The distinguishing feature between a jig and a fixture is that the jig provides a means of guiding the tool during the drilling operation. A fixture does not provide this tool guidance feature. A jig used for drilling is called a drill jig.

Comparison between a Petrol and Diesel Engines