A dynamometer is a device used for measuring the torque and brake power required to operate a driven machine.
Dynamometers can be broadly classified into two types. They are:

Some of the different types of dynamometers are discussed below in brief.

Pony Brake is one of the simplest dynamometers for measuring power output (brake power). It is to attempt to stop the engine using a brake on the flywheel and measure the weight which an arm attached to the brake will support, as it tries to rotate with the flywheel.

The Prony brake shown in the above consists of a wooden block, frame, rope, brake shoes and flywheel. It works on the principle of converting power into heat by dry friction. Spring-loaded bolts are provided to increase the friction by tightening the wooden block.
The whole of the power absorbed is converted into heat and hence this type of dynamometer must the cooled.
The brake power is given by the formula

The rope brake as shown in below figure is another device for measuring brake power of an engine. It consists of some turns of rope wound around the rotating drum attached to the output shaft. One side of the rope is connected to a spring balance and the other side to a loading device. The power is absorbed in friction between the rope and the drum. Therefore drum in rope brake requires cooling. 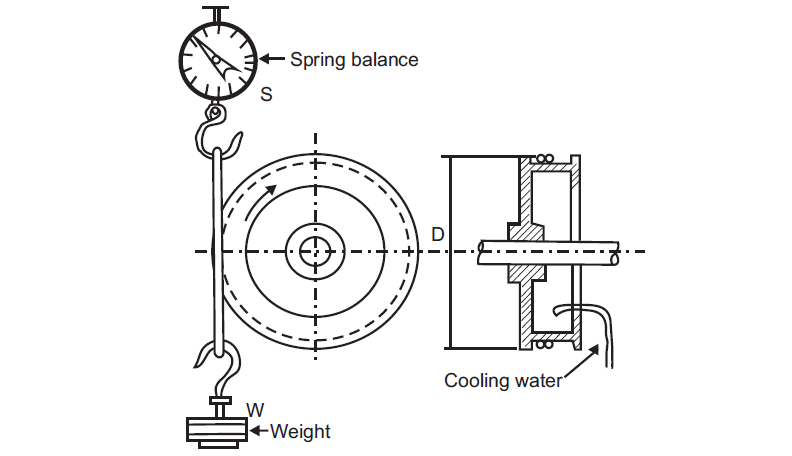 Rope brake dynamometers are cheap and can be constructed quickly but brake power can’t be measured accurately because of change in the friction coefficient of the rope with a change in temperature.
The brake power is given by the formula

where D is the brake drum diameter,
W is the weight of the load and
S is the spring balance reading.

The working principle of eddy current dynamometer is shown in the figure below. It consists of a stator on which are fitted some electromagnets and a rotor disc made of copper or steel and coupled to the output shaft of the engine. When the rotor rotates, eddy currents are produced in the stator due to magnetic flux set up by the passage of field current in the electromagnets. These eddy currents are dissipated in producing heat so that this type of dynamometer requires some cooling arrangement. The torque is measured exactly as in other types of absorption dynamometers, i.e., with the help of a moment arm. The load in internal combustion engine testing is controlled by regulating the current in the electromagnets.

The following are the main advantages of eddy current dynamometers:

A hydraulic dynamometer as shown in the figure below works on the principle of dissipating the power in fluid friction rather than in dry friction. 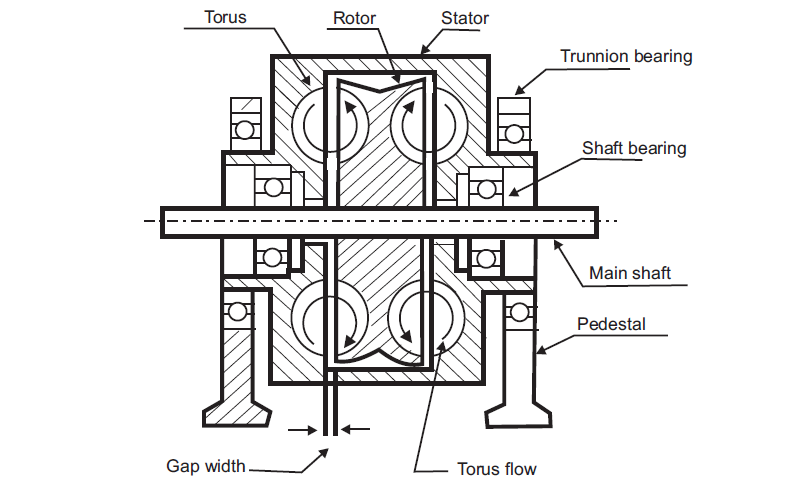 Transmission dynamometers are also called torque meters. They mostly consist of a set of strain-gauges fixed on the rotating shaft and the torque is measured by the angular deformation of the shaft which is indicated as the strain the of the strain gauge. A four arm bridge is used to reduce the effect of temperature, and the gauges are arranged in pairs such that the effect of axial or transverse load on the strain gauges is avoided.