Hooke’s Law and Modulus of Elasticity

According to Hooke’s law for a small deformation, the stress in a body is proportional to the corresponding strain.” i.e.,

Here, E = stress/strain is a constant called modulus of elasticity.

Depending upon the nature of force applied on the body, the modulus of the elasticity is classified in the following three types:

When a wire is acted upon by two equal and opposite forces in the direction of its length, the length of the body is changed. The change in length per unit length (Δl/l)  is called the longitudinal strain and the restoring force (which is equal to the applied force in equilibrium) per unit area of cross-section of wire is called the longitudinal stress.

For small change in the length of the wire, the ratio of the longitudinal stress to the corresponding strain is called the Young’s modulus of elasticity (Y) of the wire. Thus,

Let there be a wire of length ‘l’ and radius ‘r’. Its one end is clamped to a rigid support and a mass M is attached at the other end. Then

Substituting in above equation, we have

2. Bulk Modulus of Elasticity (B)

Here, the negative sign in formula implies that when the pressure increases volume decreases and vice-versa.

Compressibility
The reciprocal of the Bulk modulus of the material of a body is called the “compressibility’  of that material. Thus, 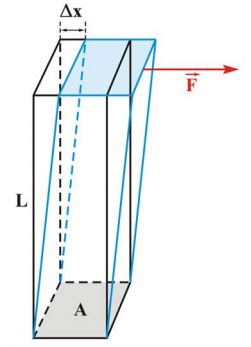 When a body is acted upon by an external force tangential to a surface of the body, the opposite surfaces being kept fixed, it suffers a change in shape of the body, its volume remains unchanged. Then the body is said to be sheared.