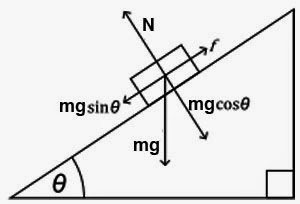 The sliding of a solid body in contact with another solid body is always opposed by force of friction. Friction acts in the direction opposite to that of relative motion and it is tangential to the surface of two bodies at the point of contact.
Friction is a necessary on every machine because it involves wearing of the machine component and consumes energy that transfers into heat. In come cases friction is desirable in the case for the functioning of a machine, such as belt drives, friction clutches.

The Five Laws of Friction: