Consider the moment of inertia IAA’ of an area A with respect to an axis AA’ (Fig.). Denoting by y the distance from an element of area dA to AA’, we write

Let us now draw through the centroid C of the area an axis BB’ parallel to AA’; this axis is called a centroidal axis. Denoting by y’ 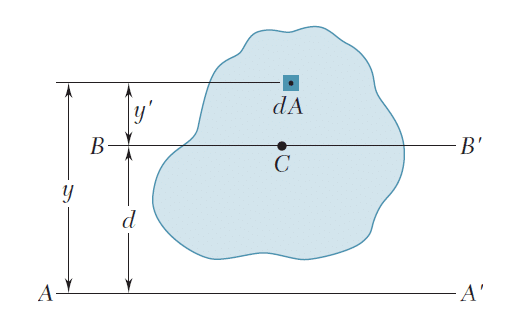 the distance from the element dA to BB’, we write y 5 y9 1 d, where d is the distance between the axes AA’ and BB’. Substituting for y in the above integral, we write

This formula expresses that the moment of inertia IAA9 of an area with respect to any given axis AA9 is equal to the moment of inertia IBB¿ of the area with respect to a centroidal axis BB9 parallel to AA9 plus the product of the area A and the square of the distance d between the two axes. This theorem is known as the parallel-axis
theorem. Substituting r2
AA9A for IAA9 and r
2
BB A for IBB, the theorem can also be expressed as