Physical vapor deposition (PVD) process is a group of thin film processes in which a material is converted into its vapor phase in a vacuum chamber and condensed onto a substrate surface as a weak layer. PVD can be used to apply on a wide variety of coating materials such as metals, alloys, ceramics and other inorganic compounds. Possible substrates include metals, glass, and plastics. PVD process represents a versatile coating technology, applicable to an almost unlimited combination of coating substances and substrate materials.

All physical vapor deposition processes consist of the following steps:

These steps are carried out inside a vacuum chamber, so evacuation of the chamber must precede the actual PVD process.

Synthesis of the coating vapor can be accomplished by any of several methods, such as electric resistance heating or ion bombardment to vaporize an existing solid (or liquid).
These and other variations result in several PVD processes.

They are grouped into three principal types:

Below table 1 presents a summary of these processes.

Let us see these three processes in more detail.

Specific materials (mostly pure metals) can be deposited onto a substrate by first transforming them from solid to vapor state in a vacuum and then letting them condense on the substrate surface. The setup for the vacuum evaporation process is shown in Figure 1. The material to be deposited, called the source, is heated to a sufficiently high temperature that it evaporates (or sublimes). Since heating is accomplished in a vacuum, the temperature required for vaporization is significantly below the corresponding temperature required at atmospheric pressure. Also, the absence of air in the chamber prevents oxidation of the source material at the heating temperatures. Whatever the vaporization technique, evaporated atoms leave the source and follow straight-line paths until they collide with other gas molecules or strike a solid surface. The vacuum inside the chamber virtually eliminates other gas molecules, thus reducing the probability of collisions with source vapor atoms.The substrate surface to be coated is usually positioned relative to the source so that it is the likely solid surface on which the vapor atoms will be deposited. A mechanical manipulator is sometimes used to rotate the substrate so that all surfaces are coated.Upon contact with the relative cooling substrate surface, the energy level of the impinging atoms is suddenly reduced to the point where they cannot remain in a vapor state; they condense and become attached to the solid surface, forming a deposited thin film.

If the surface of a solid (or liquid) is bombarded by atomic particles of sufficiently high energy, individual atoms of the surface may acquire enough power due to the collision that they are ejected from the surface by transfer of momentum. This is the process known as sputtering. The the most convenient form of high energy particle is an ionized gas, such as argon, energized means of an electric field to form a plasma.As a PVD process, sputtering involves bombardment of the cathodic coating material with argon ions (Ar+), causing surface atoms to escape and then be deposited onto a substrate, forming a thin film on the substrate surface. The substrate must be placed close to the cathode and is usually heated to improve bonding of the coating atoms. A typical arrangement is shown in Figure 2.
Whereas vacuum evaporation is limited to metals, sputtering can be applied to nearly any material metallic and nonmetallic elements; alloys, ceramics, and polymers. Films of alloys and compounds can be sputtered without changing their chemical compositions. Films of chemical compounds can also be deposited by employing reactive gases that form oxides, carbides, or nitrides with the sputtered metal.

Drawbacks of sputtering PVD include:

Ion plating uses a combination of sputtering and vacuum evaporation to deposit a thin film onto a substrate. The process works as follows. The substrate is set up to be the cathode in the upper part of the chamber and the source material is placed below it. A vacuum is then established in the chamber. Argon gas is admitted, and an electric field is applied to ionize the gas (Ar+) and build a plasma. This results in ion bombardment (sputtering) of the substrate so that its surface is scrubbed to a condition of atomic cleanliness (interpret this as ‘‘very clean’’). Next, the source material is heated sufficiently to generate coating vapors. The heating methods used here are similar to those used in vacuum evaporation: resistance heating, electron beam bombardment, and so on. The vapor molecules pass through the plasma and coat the substrate. Sputtering is continued during deposition so that the ion bombardment consists not only of the original argon ions but also source material ions that have been energized while being subjected to the same energy field as the argon. The effect of these processing conditions is to produce films of uniform thickness and excellent adherence to the substrate. 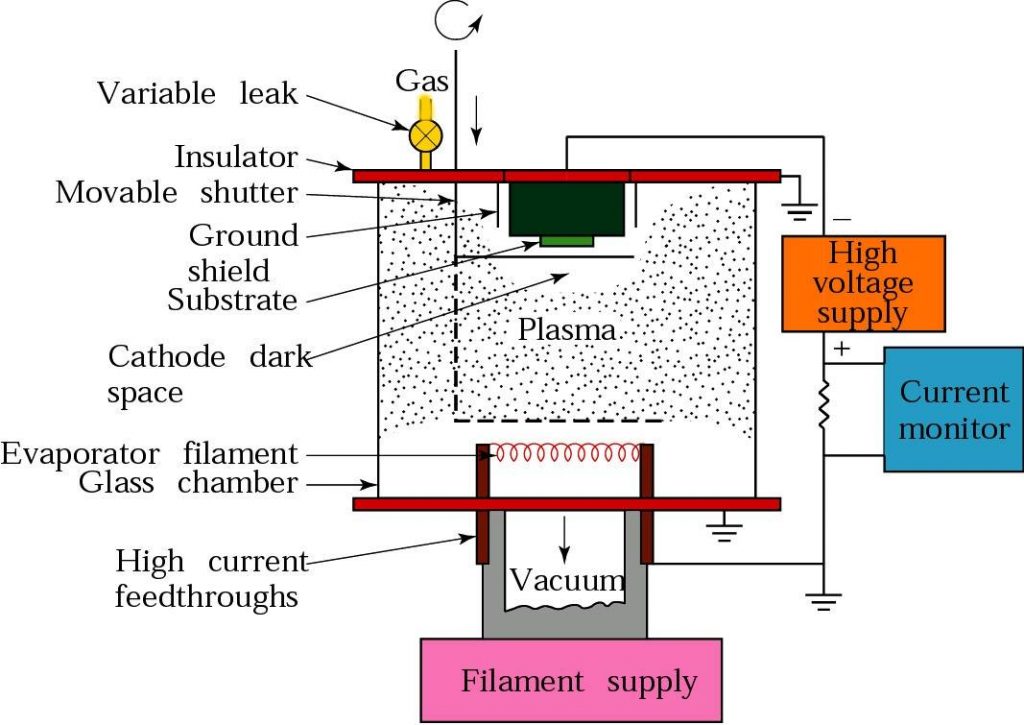 Ion plating applies to parts having irregular geometries, due to the scattering effects that exist in the plasma field. An example of interest here is TiN coating of high-speed steel cutting tools (e.g., drill bits). In addition to coating uniformity and good adherence, other advantages of the process include high deposition rates, high film densities, and the capability to coat the inside walls of holes and different hollow shapes.