Power reactors can be heterogeneous or homogeneous. A heterogeneous power reactor has a large number of fuel rods with the coolant circulating around them and carrying away the heat released by nuclear fission. In a homogeneous reactor, the fuel and moderator are mixed, e.g. a fissionable salt of uranium like uranium sulfate or uranium nitrate dissolved in the moderator like water (H2O) or heavy water (D2O). The solution is critical in the core. Due to difficulties in component maintenance, induced radioactivity, erosion and corrosion, homogeneous reactors are not common. Present day nuclear reactors are of the heterogeneous class. These power reactors are again classified on the criteria fuel used, the neutron flux spectrum, the coolant and the moderator if used.

Light water-cooled and moderated reactors (LWR) using slightly enriched uranium fuel are the type most commonly used for power production These reactors are further divided into: 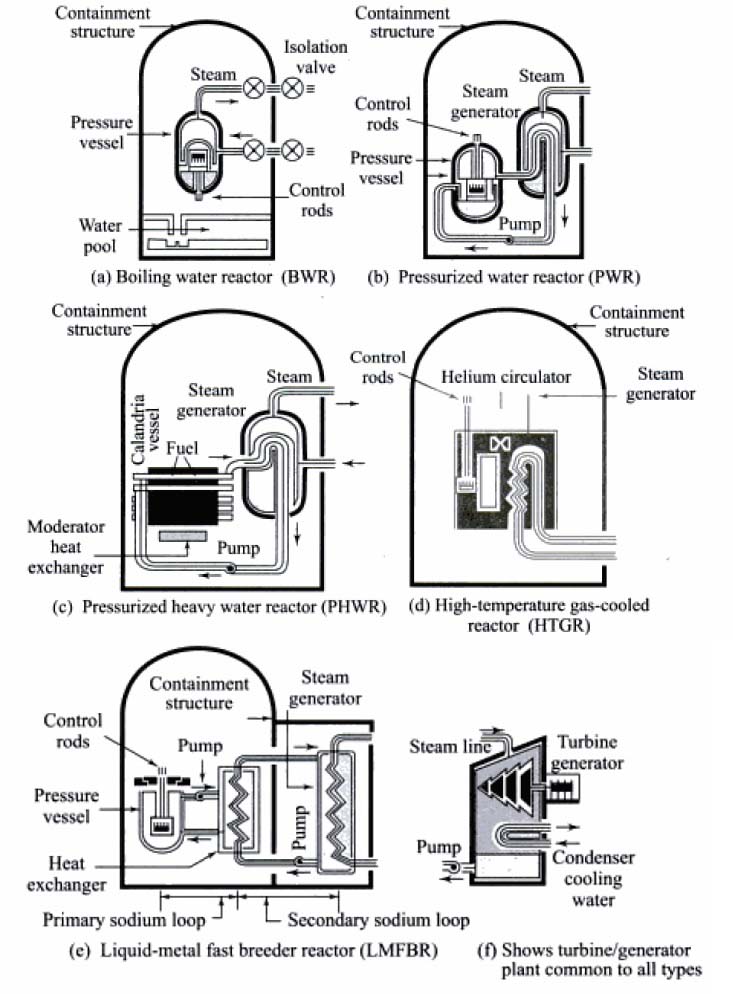 High temperature gas-cooled reactors (HTGR) have been used in European countries like the United Kingdom, France and Germany. Fast reactors which use high energy neutrons for fission and require no moderator utilize a liquid metal as a coolant with either plutonium or a plutonium-uranium mixture of fuel. Liquid metal fast breeder reactors (LMFBR) are likely to be a source of electric power for the future. A breeder reactor produces more fissionable isotope then what it consumes. The schematic diagrams for nuclear steam supply systems (NSSS) of five different types of reactors are shown in the below figure.

The characteristics of different reactor systems are provided in the below table 2.