Revenue of a firm is affected by the policies adopted by the competitors, by the firms pricing policy and changes in market demand for the product and services rendered by the firm. Factors that affect the expenses include the prices paid for inputs, business volume and the efficiency of translating the raw material resources and resources into a product.

The study of the profit-volume relationship of a business helps to identify a point at which a business moves from loss to profit position is termed as a break-even analysis. Break-even analysis is a tool which finds the point, either in monetary terms or in terms of a number of units, at which total costs equal revenues. The point is called the break-even point.

Steps Involved in Break Even Analysis: 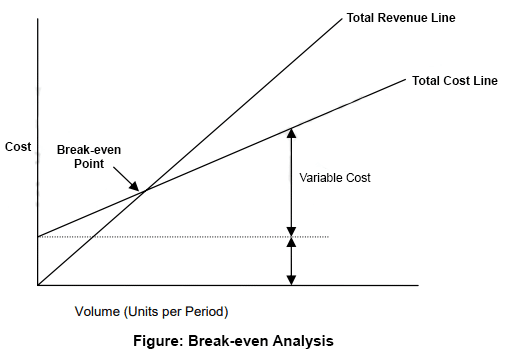 The point at which the revenue line intersects the total cost line is called the break-even point as shown in the above figure. Areas of the graph enclosed between the two lines, below and above the break-even point, are termed as loss corridor and profit corridor respectively.

Mathematically, it can be calculated as follows:

At the break-even point,

Solving for x, we get 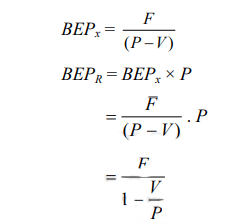 Profit = (Difference in fixed and variable cost) × No. of units produced – Fixed Costs

With these equations, we can directly solve for break-even point and profitability for units to be produced. Break-even analysis helps to identify processes with the lowest total cost for the expected volume. It also identifies the largest profit corridor and thus helps in addressing two major issues with which a process decision be made successful.