The Scotch yoke is also known as the slotted link mechanism. The slotted link mechanism is used for converting the linear motion of a slider into rotational motion or vice-versa. This mechanism is generally found on shaping machines where a single point cutting tool is mounted on the front of the slider or ram, in a hinged tool post. The tool cuts on the slow forward stroke and lifts over the workpiece on the quick return stroke. The slotted link rocks from side to side, driven by the sliding block on the bull wheel. 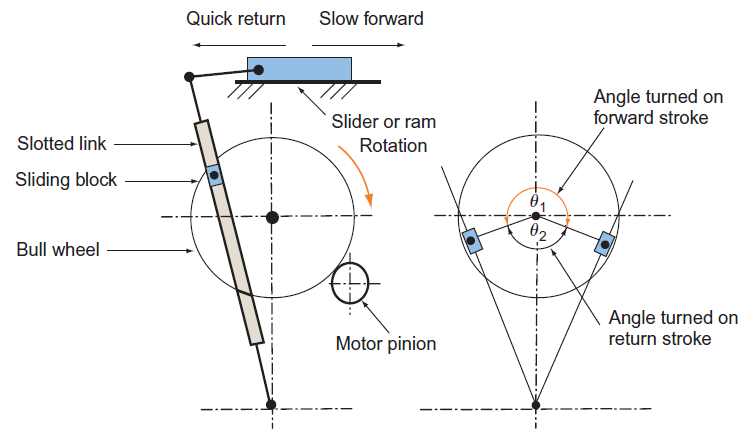 The bull wheel as shown in the above figure 1 rotates at a constant speed, the angle through which the bull wheel rotates on the forward stroke is greater than the angle through which it rotates on the return stroke. This imparts the slow forward and quick return motion to the slotted link and slider. The distance of the sliding block from the center of the bull wheel can be altered to vary the length of stroke of the slider. Stoch yoke mechanism can be seen understood visually by seeing the below animation.

The Whitworth quick return motion also has a slotted link and sliding block as shown in figure 2. This mechanism is used on planning machine, which is quite large and on slotting machine which are small. With the slotting machines, a single point tool is fixed to the front of the slider and is used for cutting fine grooves and key-ways. With planning machines, the slider is the worktable on which the workpiece is secured. This moves with slow forward and quick return motion beneath a stationary single-point cutting tool.

The driving gear which contains the sliding block rotates at a constant speed. The sliding block causes the slotted link to rotate but because it has a different center of rotation, its speed is not constant. As we can be seen from figure 2 above, the angle through which the driving gear and slotted link rotate on the forward stroke is greater than the angle through which they rotate on the return stroke. This imparts the slow forward and quick return motion to the slider, it can be seen and understood visually from the animation.


Comparison of Solids, Liquids and Gases