The simple Rankine cycle is also a reversible cycle.

Consider the idealized four-steady-state-process cycle in which state 1 is saturated liquid and state 3 is either saturated vapor or superheated vapor. This system is termed the Rankine cycle and is the model for the simple steam power plant. It is convenient to show the states and processes on a T–s diagram, as given in Figure 1.

The four basic components of Rankine cycle are shown in figure 1 each component in the cycle is regarded as control volume, operating at steady state.

Pump: The liquid condensate leaving the condenser at the state  1 is pumped to the operating pressure of the boiler. The pump operation is considered isentropic.

Turbine: The vapor leaving the boiler enters the turbine, where it expands isentropically to the condenser pressure at the state 4. The work produced by the turbine is rotary (shaft) work and is used to drive an electric generator or machine.

Condenser: The condenser is attached at the exit of the turbine. The vapor leaving the turbine is wet vapor and it is condensed completely in the condenser to the state 1, by giving its latest heat to some other cooling fluid like water. 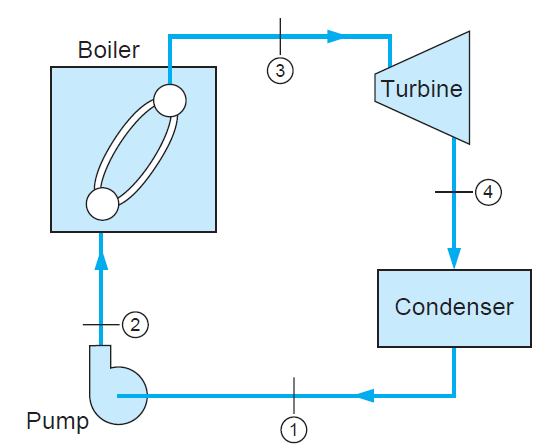 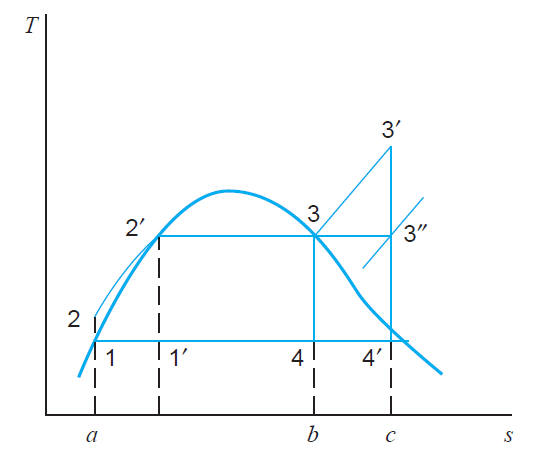 The Rankine cycle also includes the possibility of superheating the vapor, as cycle 1–2–3|–4|–1.

If kinetic and potential energy changes are neglected, heat transfer and work may be represented by various areas on the T–s diagram. The heat transferred to the working fluid is represented by area a–2–2|–3–b–a and the heat transferred from the working fluid by area a–1–4–b–a. From the first law of thermodynamics we can conclude that the area representing the work is the difference between these two areas—area 1–2–2|–3–4–1. The thermal efficiency is defined by the relation

In analyzing the ideal cycles in this chapter, the changes in kinetic and potential energies from one point in the cycle to another are neglected. In general, this is a reasonable assumption for the actual cycles.

The Rankine cycle is chosen as ideal cycle even though thermal efficiency is less than Carnot cycle (1|–2|–3–4–1|). This is due to mainly two reasons:

Thus, the Rankine cycle is the ideal cycle that can be approximated in practice.

Advantages and Disadvantages of using LPG in S.I Engine