Resistance is defined as the opposition offered by a substance to the flow of electric current. 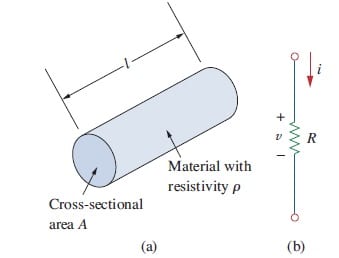 (a) Resistor, (b) Circuit symbol for resistance

where ρ is known as the resistivity of the material in ohm-meters.

It may be noted here that resistance is the electric friction offered by the substance and causes the production of heat with the flow of electrical current. The moving electrons collide with atoms or molecules of the substance, each collision resulting in the liberation of a minute quantity of heat.

A wire is said to have a resistance of 1 ohm if a p.d. of 1 volt across its ends causes 1 ampere to flow through it (See Fig.).

Another way of defining ohm.
A wire is said to have a resistance of 1 ohm (Ω) if it releases 1 joule (or develops 0.24 calorie of heat) when a current of 1 A flows through it for 1 second.

A little reflection shows that the second definition leads to the first definition. Thus 1 A current flowing for 1 second means that total charge flowing is Q = i × t = 1 × 1 = 1 coulomb. Now the charge flowing between A and B (See Fig.) is 1 coulomb and energy released is 1 joule (or 0.24 calorie).

Obviously, by definition, p.d. between A and B should be 1 volt.