Saint-Venant’s principle states that if the forces acting on a small portion of an elastic body are replaced by a statically equivalent system of forces on the same portion of the surface, the effect upon the stresses in the body is negligible except in the immediate area affected by the applied forces. The stress field remains unchanged in areas of the body which are relatively distant from the surfaces upon which the forces are changed. ‘Statically equivalent systems‘ implies that the two distributions of forces have the same resultant force and moment.

Saint-Venant’s principle allows simplification of boundary condition application to many problems as long as the system of applied forces is statically equivalent.

We have already known through Hooke’s law, the relationship between strain and stress. Strain to be proportional to stress, we can get a good idea about the magnitude of normal stress by examining the normal strain in a material as it is being subjected to some loads. To allow this, we can draw lines parallel to the normal plane and see if they remain plane during load application. In each of the following cases, witness how near the discontinuity there is a non-uniform distribution in the strain (and therefore stress) field, while farther away the distribution is linear (ie. the lines remain straight). 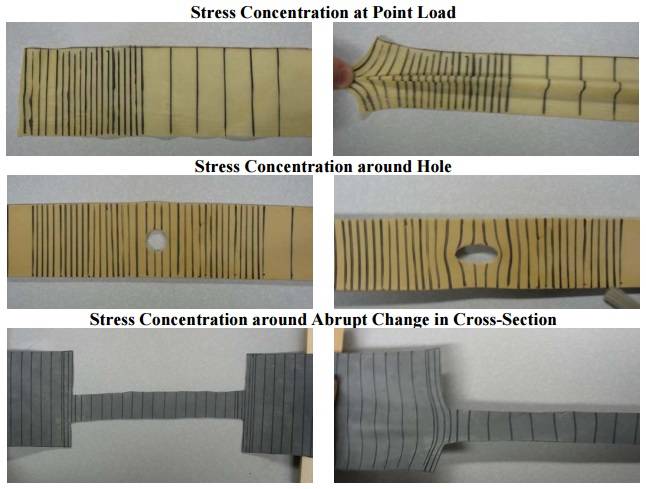 
When can you say a System is in Thermodynamic Equilibrium ?