There are a wide variety of geometries that are measured in angular units. These varieties include angular separation of bounding planes, digression from a basic direction, angular spacing conditions related to a circle, etc. Because of these diverse geometrical forms, different types of methods, equipment and instruments are available to measure angles in common angular units of degree, minute and second.

Several factors come into the role in the selection of the appropriate angular measuring instruments. These factors may be the size, general shape of the part, the location and angular accessibility of the feature to be measured, expected range of accuracy, etc.

As in linear measurement, they can be categorized into two groups. The first one is the standard line instrument. It includes divided scales like protractors, Bevel Protractors. The second category of angular measuring instruments is called face standard instruments. Sine bars and angle gauges fall in this group. 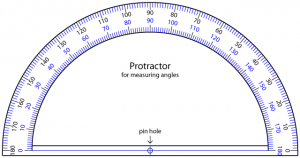 The protractor is the simplest instrument for measuring angles between two faces. It consists of two arms and an engraved circular scale. The two arms can be set along with the faces between which the angle is to be measured. The body of the instrument is extended to form one of the arms. A simple protractor consists of a blade that pivots about a semicircular head that is graduated in angular units (e.g., degrees, radians). To use, the blade is rotated to a position corresponding to some part angle to be measured and the angle is read off the angular scale.

Bevel Protractor is an angular measuring instrument capable of measuring angles to within 5 min. Bevel Protractor consists of a base to which a vernier scale is fixed. A protractor dial is mounted on the circular section of the base. The protractor dial is marked in degrees with every tenth degree numbered. The sliding blade is fitted into the dial; it may be extended to either side and set at any angle to the base. The blade and the dial are rotated together as a unit. Fine adjustment is obtained with a small knurled-headed pinion that, when turned, engages with a gear attached to the blade mount. The protractor dial may be locked in any position using the dial clamp nut.

Measurement in a bevel protractor instrument is made either by embracing the two bounding elements of the angle or by extraneous referencing. The vernier protractor is used to measure an angle greater than 90° but less than 180°. An acute angle attachment is fastened to the vernier protractor to measure angles less than 90°. The main scale is divided into two arcs of 180°. Each arc is divided into two quadrants of 90° and has a graduation from 0° to 90° to the left and right of the zero lines, with every tenth degree numbered. The vernier scale is divided into 12 spaces on each side of its zero (total 24). The spacing in the vernier scale is made in such a way that the least count of it corresponds to 1 /12th of a degree, which is equal to 5′.

The below image shows a diagram of a bevel protractor. 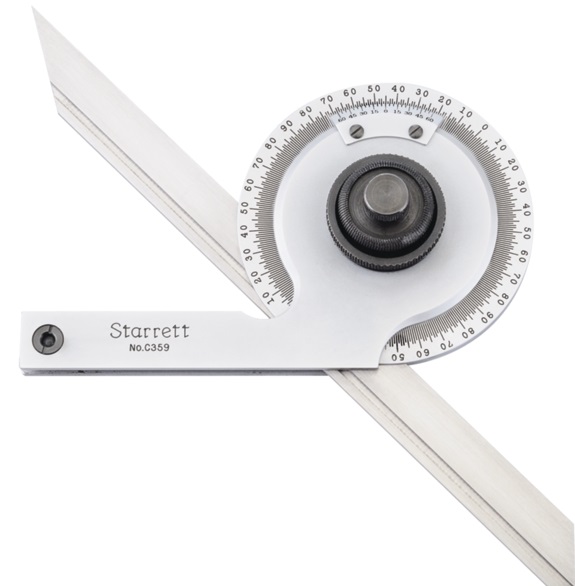 High precision in angular measurements can be made using a sine bar instrument, illustrated in Figure 4. One possible setup consists of a flat steel straight edge (the sine bar), and two precision rolls set a known distance apart on the bar. The straight edge is aligned with the part angle to be measured, and gauge blocks or other accurate linear measurements are made to determine the height. The measurement using a sine bar is carried out on a surface plate to achieve the most accurate results. This height ‘H’ and the length ‘L’ of the sine bar between rolls are used to calculate the angle ‘A’ using the formula

Methods of Inspection for Finding Out Defects in Casting