The system has a primary circuit of low-voltage current and a secondary circuit for the high-voltage circuit. 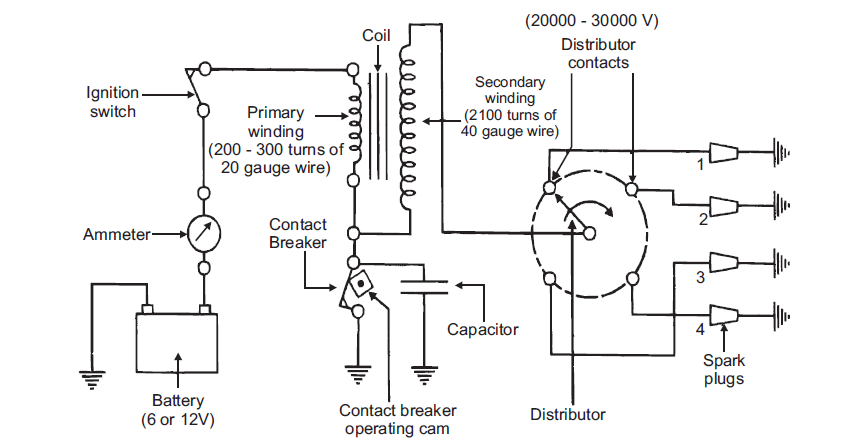 When the ignition switch and the breaker points are closed a low-voltage current flows from the battery through the primary circuit and builts up a magnetic field around the soft iron core of the ignition coil.

The induced current in the primary to overcome the resistance of a spark across the gap and the ignition of the combustible charge in the cylinder takes place. The induced current is the primary, as it was pointed out above flows in the same direction as it did before the breaker points opened up and charges the condenser.

This oscillation is weekend with every succeeding reversal in the current flow until the original potentials and the direction of current flow the primary circuit is established. The discharge of the condenser by itself does not produce the spark, but only hastens the collapse of the magnetic field around the soft iron core.

The condenser, which has a capacitance range from 0.15 to 0.24 mf in the automotive system, not only assists in the collapse f the magnetic field but also prevents arcing at the breaker points by providing a place for the induced current to flow in the primary circuit.

The spark plug leads are called the ignition harness. Since the lead carries a very high potential, special insulation is required to prevent a short circuit. Even with the special insulation, these leads are subjected to breakdowns which result in high-tension short circuits and to leakage that lower the voltage available at the work plug. Also, the leads should be shielded to aid in the prevention of radio interference.