The first gas-cooled reactors with carbon dioxide (CO2) gas as coolant at a pressure of 16 bar and graphite as moderator were developed in Britain. The fuel used is natural uranium, clad with an alloy of magnesium called Magnox. 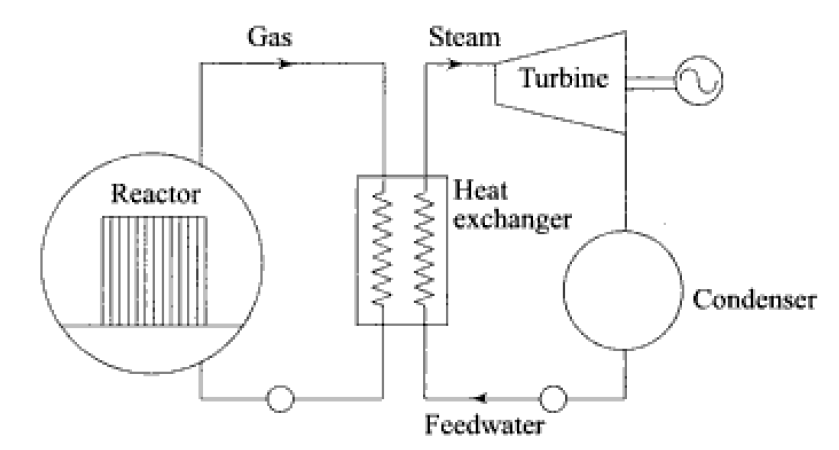 Several types of gas-cooled reactors have been designed and built, with England developing an advanced gas-cooled reactor (AGR) system. The AGR uses UO2 as the fuel clad in stainless steel tubes with CO2 gas a coolant and graphite as moderator.

The graphite moderated helium-cooled HTGR (High Temperature Gas-Cooled Reactor) is designed to use U-233 as the fissile material and Thorium as fertile material. Initially, the system would have to be fueled with U-235, until sufficient U-233 is available for makeup fuel. Because of the very high melting point of graphite, these fuel elements can operate at very high temperatures and it is possible to generate steam at conditions equivalent to those in modern coal-fired power plant. The basic fuel forms are small spheres of fissile and fertile and fertile material as carbides, UC2 or ThC2. The fissile spheres are 0.035 to 0.050 cm in diameter and the fertile spheres are 0.06 to 0.07 cm in diameter. Each sphere is coated with two or three layers of carbon and silicon carbide to prevent fission products from escaping from the particles. Helium is suitable coolant in the sense that it is chemically inert, has good heat transfer characteristics and low neutron absorption. Being a monoatomic gas, it can produce more power for given temperatures in the Brayton cycle with higher thermal efficiency.