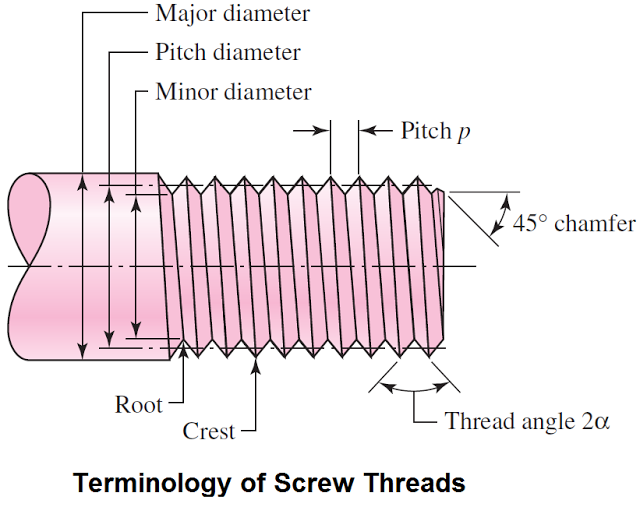 Axis of a thread: This is an imaginary line running longitudinally through the center of the screw.

Crest: The crest of the thread is the topmost surface joining the two sides.

Root: The root of the thread is the bottom of the groove between the two flanks.

Flank: Flank of thread are straight edges that connect the crest with the root of the thread.

Pitch: The pitch of a thread is the distance measured parallel to the axis from a point on a thread to the corresponding points on adjacent thread forms in the same axial plane and on the same side of the axis.

Depth of thread: The depth of a thread is the distance between the crest and root of the thread.

Major diameter: It is an imaginary largest diameter of the thread which would touch the crests of an internal or external thread.

Minor diameter: It is an imaginary smallest diameter of the thread which would touch the roots of an external thread.

Pitch diameter: It is a theoretical diameter between the major and minor diameter of screw threads.

Helix angle: On the straight thread, It is the angle made by the helix of the thread at the pitch line with the axis.

Lead angle: On the straight thread, It is the angle made by the helix of the thread at the pitch line with a plane perpendicular to the axis. Lead angle is measured in an axial plane.

Included angle: The included angle is the angle between the flanks or slope of the thread measured in an axial plane.

The lead: It is the distance the nut moves parallel to the screw axis when the nut is given one turn. For a single thread as shown in the figure above, the lead is the same as the pitch of the screw thread.