There are many theories of fatigue; we have written in brief about the three theories – Orowan theory, fatigue limit theory and wood’s theory here.

Orowan theory considers the metal to contain small, weak regions. Slip occurs readily along these regions. The alloy also contains impurities, i.e., inclusions, which act as notches and cause stress concentration. In the elastic matrix, these regions are treated as plastic regions, which experience an increase in stress even when the repeated applied stress is constant. This increase in stress causes plastic strain in the weak region. A crack is formed when plastic strain in the weak region exceeds beyond a specific value. Until a large crack is formed, this process is repeated again and again.

Obviously, the specimen with a lesser amount of nitrogen and carbon will have a lesser tendency for strain energy. Moreover, S-N curve will not show fatigue limit for this specimen. Heat treated steels exhibit definite fatigue limit. This reveals that localized strain aging affects the fatigue properties of the specimen to a large extent. 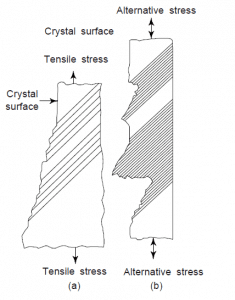 (a) Steps produced due to strain. (b) When strain is cyclic, notch and edge formed in early stages of fatigue.

The strain direction in fatigue is reversed again and again. The slip produced by fatigue consists of slip bands, which are the slip movements of the order 10–9 cm in length and 10–7 to 10–6 cm in height. When there is a strain in a single direction, the steps that appear are simple (Figure (a)) and when the loading is cyclic, the slip bands tend to group as notches or ridges (Figure (b)). The notch acts as a starting point for fatigue crack and the notch with a very small root radius, act as stress raiser; the crack slowly propagates through the material and after some time, a stage will be reached for the remaining portion of the cross-section is too small to bear the maximum load. Sudden failure occurs at this point. The final fracture is usually of cleavage type.